In my last post, I talked about the kinds of metrics that I don’t like. But sometimes even good metrics can go wrong.

When I worked for a previous employer, we used “load sheets” on our Agile card wall. These were pieces of paper divided into 10 blocks (10 days in a 2 week iteration) and then we would cut out cards for the features that were sized to take up as many blocks as the estimate (so a 3 day estimate card would take up 3 blocks). We would use different colored dot stickers to indicate when we had discussed the requirements, discussed the design, completed the development, and when QA was complete. Each developer on the team would have one of these sheets on the wall, so you could see who was working on what and where we were pretty easily. 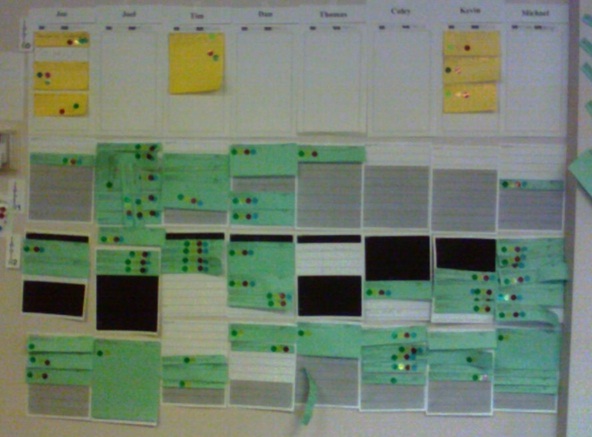 I didn’t come up with the system, but I’m guessing that they designed it for at least two reasons (probably more than that):

This system did an excellent job of both of those things. The problem is that the development team interpreted it in a completely different way.

When the developers looked at the sheets, these are some of the things that they thought:

As a result, the following things actually happened (I’m not making this stuff up):

Whoa, what happened?!? I’m sure this wasn’t what the people who came up with this system intended. But that’s the problem — while the system provided a lot of positive benefits, it also indirectly encouraged individualistic behavior and cutting corners and discouraged collaboration because of implied metrics. I was leading the team, and I wasn’t going into TFS and spitting out reports to compare developers, and I wasn’t tracking who was completing tasks within the estimated time, because it didn’t matter at all. It didn’t matter what I was or wasn’t doing — the data was being tracked, so developers assumed that something was (or could) be done with it. (I’m not using this example to criticize the people who came up with the system, because no system is perfect, and there were many very successful projects completed using this approach.)

What could we have done differently? We could figure out what message we want our card wall to convey to the developers and structure it that way. For example: